After my shower today, I was applying my raw honey & cinnamon face mask and it was almost as a lightbulb went off! Why haven't I shared what I have been doing externally to combat acne? Both honey & cinnamon are foods and whether eating or applying it to my skin, it is essentially working to make me feel good about myself.

Two years ago after traveling to the Dominican Republic, I came home with a horrible face rash. The derm suggested it was some form of sun allergy and prescribed me with a $75 medication, but not without first giving me a sample. I used the sample for a little over 10 days and never saw a difference! It was at that time that I began searching for natural remedies and stumbled across several variations of raw honey. I decided on cinnamon as its companion, solely based upon what I had immediate access to in the pantry. I mixed equal parts of each in a small tupperware container and I will tell you that within 7 days my skin was completely healed! 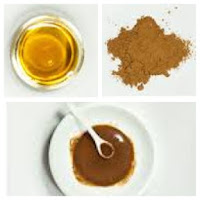 Honey in its purest form is naturally an anti-imflammatory agent and antiseptic that can heal infections. Your skin will feel extremely soft after use, due to its natural antioxidants. In addition, cinnamon is also an antiseptic and works to bring nutrients and blood to the skin surface, plumping back the collagen in your skin where the acne is.

If you suffer from occasional breakouts, or would like to continue to have a clear complexion, give it a try. Remember, what you put "on" your skin is just as important as what you put "in" your body.
Newer Post Older Post Home